The Outremont borough choses the MIAM project for the building located at 30-32 St-Just Avenue, following a call for proposals to upgrade the site.

The MIAM is registered as non-profit organization, a social economy enterprise with a cultural vocation.

The business plan is presented to the CLD Les 3 Monts and the first start-up grant is obtained.

The MIAM project, which will be located in the heart of the new Îlot Saint-Viateur cultural hub in the Outremont borough, is selected as a legacy project for Montréal’s 375th anniversary. The city allocates $1 million towards renovations.

Renovation work is completed, and the founders move into the MIAM.

Closure of the legal entity “Maison internationale des arts de la marionette” as a non-profit organization. The MIAM now exists as a centre dedicated to research and creation, entirely devoted to the puppet arts, and managed by its founders and its users! 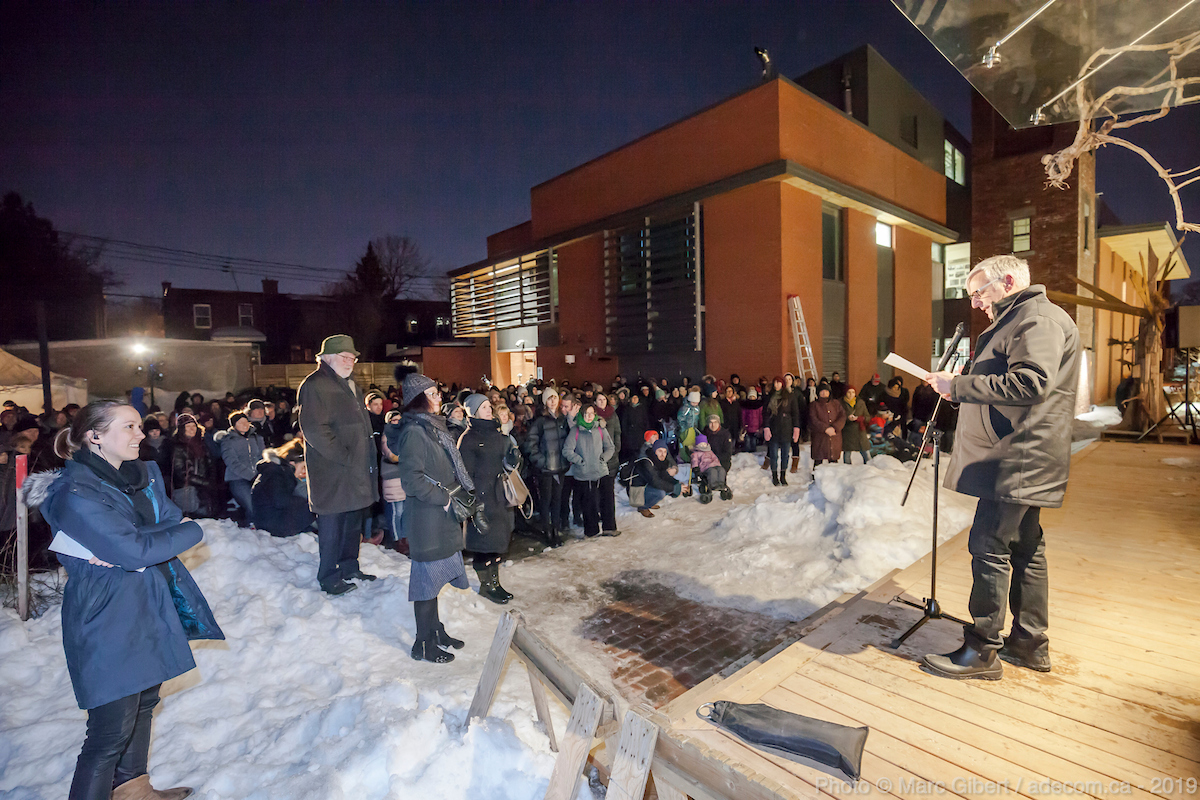 A very eloquent speech delivered on the evening
of the MIAM inauguration, March 9, 2019.
François Bissonette offers a historical perspective
and recounts the six years he dedicated to the
MIAM before its grand opening!

The fire hall horses were fortunate enough to live within its walls for the first 10 years. Then the stables were converted into a rental home.

Abandoned in 2006, the building had been home to a large number of rodents for over 10 years.

The MIAM you see today is an 11th art dream. A dream that was 25 years in the making, as Louise Lapointe would point out. A dream come true after six years of hard work, ups and downs, and changes of government at the municipal, provincial and federal levels.

Ministers and municipal councillors switched portfolios, and every one of these changes brought about its own share of setbacks:

Presentations to explain the project. Dozens and dozens of presentations.

And of course, we received comments and responses after these numerous presentations:

Don’t give up! Think big!

Or: Your file is under review, for the moment, we don’t have an answer for you, be patient! Budgetary rigour is a must!

And so on and so forth.

Louise officially asked that I come aboard: “Are you in?”

“Four meetings a year, more or less, no more for sure!”

The MIAM project is endorsed by a resolution of the Outremont Borough Council.

The business plan has four pages, a $370,000 budget, and still only four board meetings a year.

The legal entity is created – Could our dream be coming true? We were only at the beginning of the adventure, with a tiny operating budget. That was five years ago!

The appraisal report for 30-32 St-Just just arrived and the building’s renovation work is now estimated at $1,433,000.

Oh boy! The project is getting a little more complex.

Business charter and regulations, code of ethics, GST and QST tax options, charity number (or not?), establishing working committees to hammer out issues related to renovations, finances, management and activities. So many things to think about.

You remember, back in 2013 when Louise convinced me to join the adventure?

“Four times a year more or less, no more for sure!” Between August and October 2014, we held five years’ worth of meetings.

Minutes of the meeting on December 11, 2014: Both the MIAM and Place Micheline-Legendre are set to be inaugurated in 2017.

We can’t miss this opportunity!

This is the first time that we talk about a Plan B in our meeting minutes. There will be nine more Plan Bs to follow.

After the development of the FTP

With the functional and technical program, we realize that the MIAM will be too small, at least 30% too small. And there you have it! Another plan B.

A new concept appears in our business plan and minutes.

Our Plan B just won’t cut it.

Phase 1 of the renovation work begins and is beset with delays from start to finish.

A new concept emerges: Phase 1.1 and Phase 1.2 make their debut.

Phase 2 renovation work begins and is beset with delays from start to finish.

Phase 3 renovation work will begin and will probably be beset with delays from start to finish.

Thanks to the vision and the dream, thanks to the determination, stubbornness, patience, generosity, work, and, above all, thanks to the “true believers” – to all of those who had faith in the project.

The civil servants from these different levels of government who have encouraged us, who believed in us and helped us throughout this great adventure.

I would like to thank the donors, large and small.

Without you none of this would have been possible.

Very special thanks to:

Here we have two great people, two great dreamers, but above all: two determined people.

They were both determined to make their dream come true.

In this project, they have played a crucial role. Without them, I don’t think we would be here tonight.

On behalf of all the AQM puppeteers…

No! Not just the AQM puppeteers.

On behalf of puppeteers from around the world!

Housed in what used to be the old stables of the Outremont firehouse, that were then converted into apartments for local social organizations, it took nearly two years to renovate the building at 30 Saint-Just Avenue to properly accommodate the MIAM’s operations.

This major renovation project was made possible thanks support provided by:

Come take a look at the tremendous work they have accomplished and see how far the MIAM has come since its humble beginnings!

A HUGE THANKS TO ALL THE PROFESSIONALS WORKING ON THE PROJECT

AS WELL AS OUR FINANCIAL PARTNERS